Particle Size of Metal-Organic Frameworks: Is it size that matters?

Depending on the application at hand, particle size can change the performance or even the applicability of metal-organic frameworks. Nanosized MOFs find applications in membranes or biomedical applications, while large MOFs are better suited for bulk applications such as gas storage. Controlling the size is thus of great importance.

There are many different applications of metal-organic frameworks and each have their own specific requirements. These requirements are often based on properties of the MOF structures such as adsorption properties, catalytic behaviour, pore size, surface area and – particle size. Let’s have a look into how important particle sizes are and how these can be controlled.

Performance and applicability of advanced materials can be highly particle size dependant and metal-organic frameworks are no exception. In some cases, particle size is even one of the core requirements for MOFs to be applicable for the specific use case. 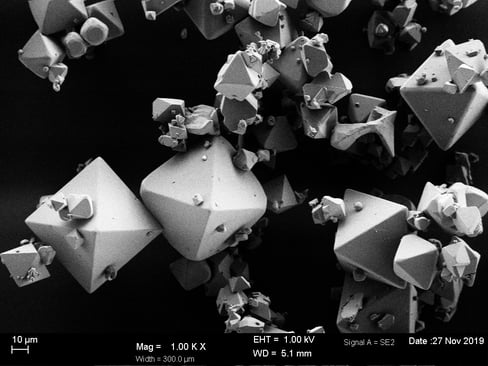 In catalysis for example, the output is relevant in combination with required catalytic material and energy required for the reaction. If the MOF itself is the catalytic material, it shows catalytic activity on the outer and inner surface of the particles. Specialised, size-selective catalysis happens on the inner surface/within the pores as larger particles are blocked. Similarly, if catalytic species are embedded in the framework, catalysis happens within the pores. In the first case, smaller-sized particles feature a higher surface for the same amount of material (e.g. 1 kg of MOF) and are thus preferential.

In adsorption/desorption applications – such as gas separation and storage – the amount of adsorbed material and the energy required for regeneration are important. To maximise uptake-capacity, it should use the whole surface of MOFs. Therefore, the internal surface of the MOF – the pores – should be made accessible by tailoring the pore size big enough for the adsorbed material. In general, smaller particles of the adsorbent allow for a faster diffusion of the adsorbate and are thus preferential. However, very small particles are also harder to contain and thus a compromise needs to be found between adsorption behaviour and particle size.

In energy storage devices such as batteries, smaller MOF particles reduce ionic diffusion length and improve ion and electron transfer. In Capacitors, the higher the surface area, the better the electrode-electrolyte interface. To apply MOFs – or other suitable material – for batteries or capacitors, a high surface and high porosity is needed. As mentioned above, smaller particle size results in a larger surface area.

In biomedical applications, particle size probably has the most important role of the mentioned applications. The human (and animal) body has its own security barriers that facilitates the flow of solutes throughout the body. Such security barriers are the walls of cells or the blood-brain-barrier (short: BBB). These barriers are semipermeable like membranes to allow certain molecules or solutes to pass while they stop others. In the medical application of MOFs the size is thus one of the most important requirements besides the loading capacity for drugs or imaging agents. Small MOF-crystals have been found to penetrate the BBB and thus offer drug delivery directly into the brain. Larger crystals would prevent this and could thus offer save delivery to other parts of the human body or even into cells.

We could go on about sensing and detection, semiconductors and the likes, but in many applications smaller particles improve material performance or offer new routes of application. To understand how to control the size of the particles, we have a look into how MOFs are formed.

How MOFs are formed

In simple words, the building blocks (metal ions and organic linkers) form to metal-organic frameworks when the synthesis conditions are right. To achieve these synthesis conditions, metal salts and linkers are brought into solution and heated to specific temperatures. During the synthesis, the metal ions detach from their salt-component and attached to the linkers (likewise detached from their solvents). The synthesis starts with single compounds of metal and linker and then the particles grow further by attaching other reagents to the framework.

In theory, a single MOF structure can grow almost infinitely – if there is an infinite amount of metal ions and linker molecules available. In practice, synthesis will yield a certain distribution of different particle sizes. Different approaches can be used to control the size and distribution to a certain extent.

Overall, there are two main approaches to control the particle size of metal-organic frameworks – following the LaMer model and the chemical equilibria model.

The LaMer model explains the nucleation of compounds according to concentration and reaction time. Once concentration reaches a certain level, nucleation starts. Nucleation causes particles in the solution to cluster together, which leads to forming bigger particles. 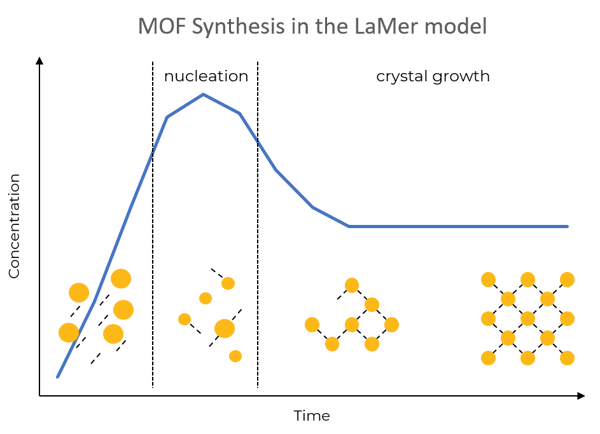 Before nucleation, metal ions and linkers are in solution. Nucleation causes particles in the solution to cluster together (and form the first compounds of metals and linkers). Compounds then grow in size to build metal-organic frameworks.

According to this theory, particle size is controlled by saturation levels, which in turn changes over time. The shorter the reaction time after nucleation, the smaller the particles and vice versa.

This theory is based on four chemical equilibria during the synthesis of metal-organic frameworks.

In this these four equilibria, several strategies for particle size optimisation exist. The amount and type of modulators – depending on the MOF synthesis and the targeted size – decide on the rate of linker deprotonation and stop the particles from growing. Tuning the ratio of metal, linker, modulator and solvent, the reaction can be further controlled, and particle size reduced. Finally, strong metal-linker bonds will increase rate of formation and reduces final growth as it depletes the solvent from required metals and linkers.

How important is particle size control for industrial purposes?

As we have seen before, the particle size has an influence on the performance in a variety of applications and in some applications, such as drug delivery agents, size is one of the most important properties. But how important is it to control particle size on large-scale synthesis?

The various synthesis routes of metal-organic frameworks will yield their own specific particle size distribution for specific MOFs. We have seen different approaches to increase or decrease the size of the MOF structures above – by time or by changing the chemical equilibria. Optimising or tuning MOFs to improve the performance for a specific application makes perfect sense during scientific research. For the application in commercial products, the synthesis and further preparation (e.g.  surface application, granulation) of MOFs need to be economically viable.

“Cost of material vs. value to the end user”

This being said, optimisation of the standard synthesis yield will most likely increase cost because of longer production time and increased raw material demand. Depending on the MOF, we should evaluate the required procedure from an economic point of view. Working towards a preferable size that will improve performance by 10% but increases production cost significantly might not be reasonable in the short run. In the long run, if the by 10% more performing MOF consistently improves processes, the increased initial investment are worthwhile.

Besides the increased production cost, smaller particles might negatively impact the applicability of the MOFs. In almost any applications, the particles need to be contained in a specified parameter. The smaller the MOF particles, the more effort is needed to contain them. For bulk applications such as gas storage, larger crystals are better suited.

In our blog post ‘price vs. value’ we emphasized taking every part of the product offering into account when evaluating the value of metal-organic frameworks for your application. The same applies to the production: every part needs to be considered to achieve the most suitable material for you.