With the spread of the corona virus and the resulting respiratory diseases, the medical teams all over the world fight hard to save their patients. Providing oxygen to these patients is critical. New technologies reach higher efficiencies through selective gas separation.

As oxygen in high concentration is highly reactive, using gas tanks filled pressurized or liquid oxygen is a great safety risk. Mobile oxygen concentrators can bypass this risk by concentrating ambient air to sufficient levels for treatment (medical grade 88-92% oxygen) on the spot. Usually, these devices remove nitrogen from the air and provide either specific doses or continuous flow of oxygen-enriched air to the patients.

The separation of nitrogen and oxygen is one of the most challenging processes, as both molecules are very similar in size. Mobile oxygen concentrators are based either on pressure swing adsorption or membrane technology, that will remove mainly nitrogen from the gas feed.

In general, pressure swing adsorption is often used in rapid cycling/low scale separation methods in order to keep the capital cost of the adsorbent materials low. The basic idea of adsorption separation is that some molecules in a gas mixture are sticking more easily to the surface of an adsorption material than others and are thus removed from the stream.

For mobile oxygen concentrators, zeolite 13X is used to adsorb nitrogen under pressure of 20 psi/~1.4 bar at ambient temperature. Oher zeolites used in nitrogen adsorption are zeolite 4A, 5A, LiAgX, LiLSX, and 10X. Once the zeolite used its uptake capacity, the adsorption bed is depressurised and the nitrogen released from the adsorbent. This cycle is repeated over to steadily produce more than 10 l of oxygen per minute. The uptake capacity of oxygen in  Zeolite 13X is about about 0.6 mmol/gr at ~1.4 bar – which is about about 14l of gas in a single gram of material.

Ambient air consists of about 78% of nitrogen and only about 20% oxygen. Zeolites are selective towards nitrogen rather than oxygen, which means that current oxygen concentrators are filtering out the larger portion of the air stream rather than the less abundant, desired oxygen. Having an adsorption material that is selective towards oxygen would reduce the required amount of air compressed in the concentrator and subsequently reduce the energy needed. 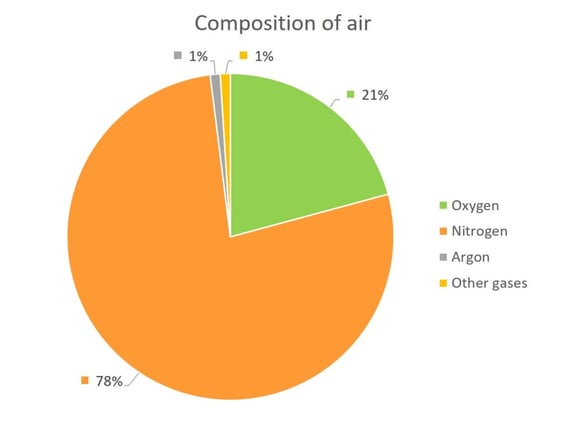 A rather young adsorption material – metal-organic frameworks – shows tailorable selectivity towards desired gases. Metal-organic frameworks (or MOFs in short) consist of metal ions connected with organic ligands that are arranged in a structure framework. Much like zeolites, these structures are porous and feature distinct properties. However, but their tunability makes them perfect to cater for different applications and settings.

The well-known MOFs HKUST-1, MOF-74 and MIL-100 selectively adsorb oxygen over nitrogen, but have their limitations for long-term applications. However, tuning the MOF-structure results in higher uptake capacity (in some MOF more than 19 mol/kg) and a selectivity for O2 over N2 of more than 7.

The benefit of MOFs over zeolites is the tunability towards desired adsorption properties. By combining the right building blocks, the binding forces between MOF structure and O2 are stronger than between MOF and N2. At the same time, a lower binding force is preferential to easily desorb the oxygen from the material. Therefore, we look for a balance between strong enough differentiation between O2 and N2 and low overall binding force.

By capturing the desired oxygen, the required amount of adsorbent material will be reduced. A higher uptake capacity further means less cycles for the same amount of oxygen and will subsequently reduce the required energy for the concentrator.

Industrial applications just around the corner

Due to the tuneability of MOFs and their cycle stability, they offer new routes in other industrial separation processes. This includes industrial scale oxygen or nitrogen production, separation of feed stock gases in the petrochemical industry or capturing green house gases. Specialised MOFs have also been tested for drug-delivery or batteries and semiconductors.